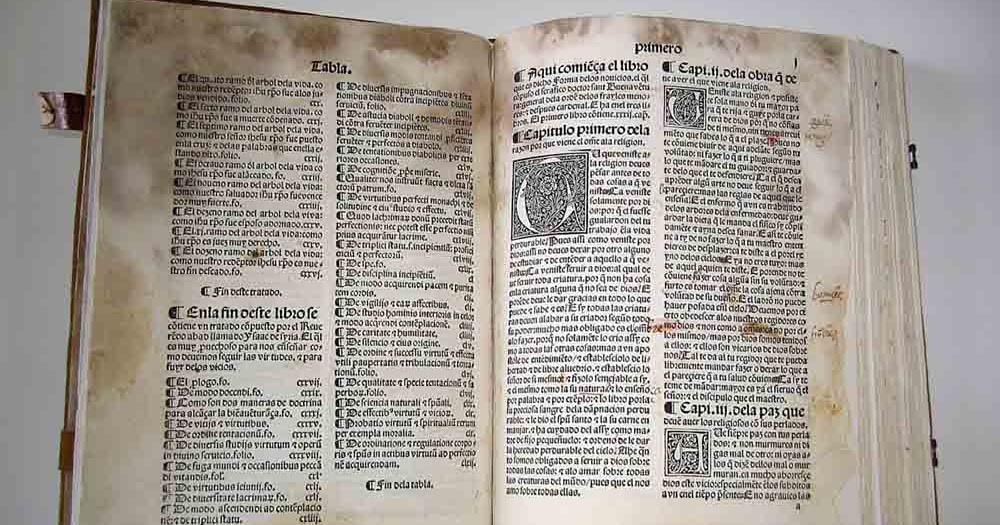 The so-called incunabula book, small, with 48 printed and 14 blank pages, which includes the reforms promoted by Bishop Juan Arias Davila and discussed by Cabildo representatives, abbots, abbots, priests and clergy of Segovia, but also laity and representatives of the population or institutions such as the monarchy.

Forbidding the clergy from carrying weapons without express permission, and the compulsory training in public study that the bishop himself directs to those who did not know how to pray the Lord’s Prayer in Latin, or the obligation to wear it faithfully, without silk or gold rings, these are some of the reforms included in this book.

Nor did those present at that meeting imagine that, 550 years later, the people of this city would recreate the party that was celebrated around this extraordinary event, now with theatrical performances, medieval dances, or writing workshops of that time.

This city of Segovia, with a population of less than 560, is located forty kilometers north of the provincial capital, has been decorated for twenty years with medieval emblems, while its neighbors wear old clothes to return, for a few days, to the fifteenth century.

They do this, among other things, through short plays in which they recreate various moments around that historical complex, such as the meeting between Arias Davila and master printer Juan Brix, a native of the area where Johannes Gutenberg invented the printing press. Twenty years ago.

It was the bishop who called him, having learned of the new invention due to his close relations with Rome, where at that time many German print designers settled, so that Brix could set up his workshop in Segovia.

Thomas Conde, President of the Sinodal Cultural Association of Aguilafuente, recounts this historical moment with passion in an interview with Agencia Efe: “He thought, with this head that he had, a creative man, that there must be something he said would arrive, in an instant, To many people. That was the printing press. Find out, and behold, this is the original,” he recounts.

The “great work” that had been done over twenty years in this festival and that, since the epidemic could not be resumed, was the theatrical representation of the Synod, in which 28 residents of the city performed various characters in the same place where it was held. ..then the church of Santa Maria.

Failing that, some novelties have been included this year, such as a concert tour with scenes from Sinodal, a short theater competition involving four companies – three from Segovia and one from Alcalá de Henares – and a rap battle.

Another example of actions included in the program is the medieval writing workshop on Friday given by art historian Silvia Olmos, who recreated Juan Arias Davila’s “scenario” with young scribes aged 6-10 armed with quills to show how difficult this work was. its time.

“In this fifteenth century there was a great demand for books, and there was not enough to write them and create all the required administrative and judicial documents, which is why Juan Arias Davila brought us the printing press to Spain, so that we could quickly publish them,” he reported in an interview with Effie. the historian.

Olmos considers the Aguilavuente Synod a “bomb” and a “huge success” because its theaters are “well-documented” and “the people work hard” to get ahead: “It’s one of the most attractive transmissions. What is the Aguilafuente Synod?

For twenty years, the Sinodal Cultural Society of Aguilavuente has promoted the celebration of this important landmark so that it becomes the cultural and tourist attraction that you believe it deserves to be.

They do this with the sole institutional support of the Segovia Provincial Council, which offers a grant of 2,500 euros and another 1,500 for the first prize in the short theater competition, and Aguilavuente City Council, which collaborates with 3,000 euros, while cooperating the rest resources come from the share of more than 300 members of the association.

As long-term goals, the association dreams of setting up a book museum in Aguilavuente and with the declaration of its festival as a tourist interest in Castilla y León, they also wish the capital of Segovia to promote the venue of the workshop. printed.

For the rest of the year, Aguilavuente suffers from the evils of the “typical rural environment of Castilla y León”, such as the gradual loss of the population from over 800 registered in 2003 to less than 557 now, and the threat of a loss of services that its neighbors do not hesitate to rebel against.

At the end of last year, it was the “battle” of the people that succeeded in stopping the regional government’s initiative to shut down the emergency center located there, as did Thomas Conde, who in addition to being president of the association is a country doctor, retired only a few years ago.