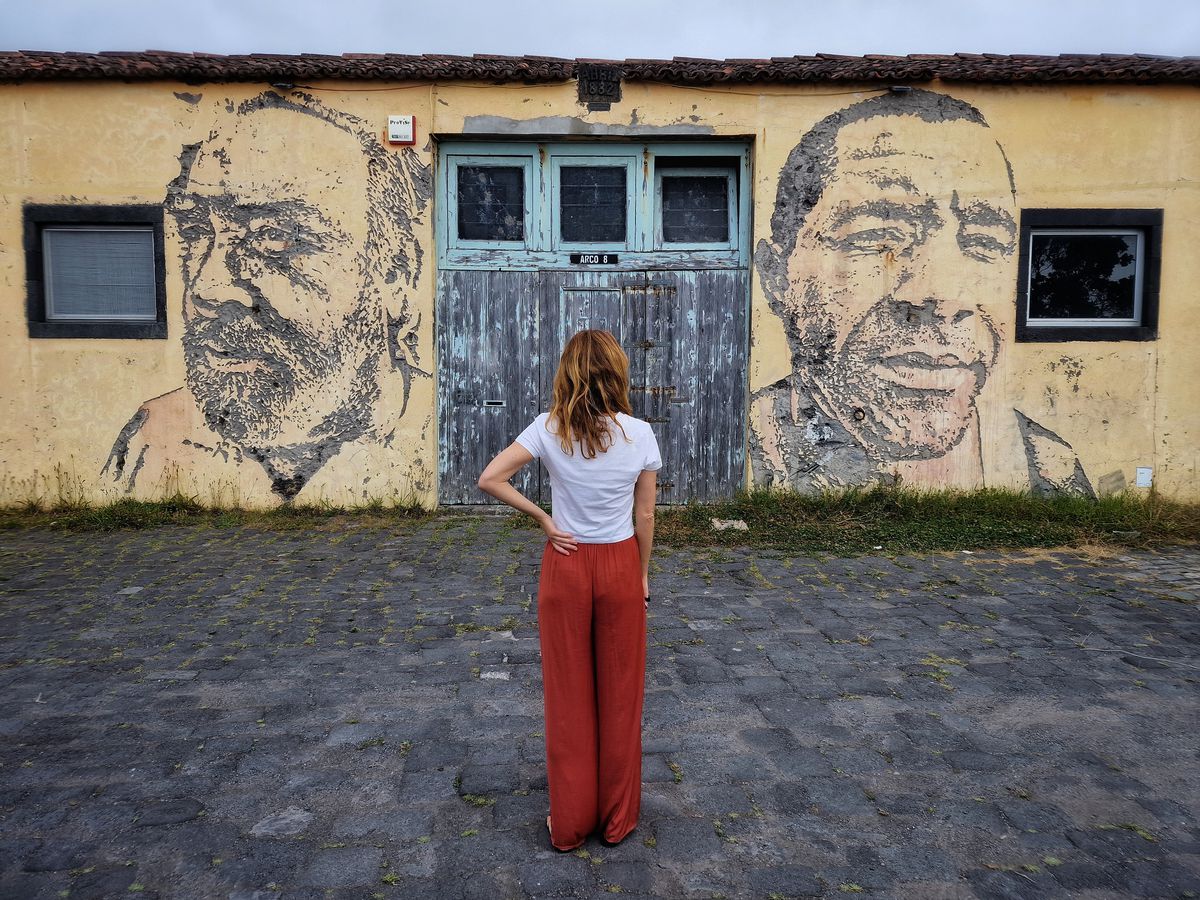 On the island of São Miguel, culture has no doors. Untamed and wild, blends in with the untamed landscape. With the exception of the capital, Ponta Delgada, where urban assaults continue to wreak havoc in the misunderstood name of tourism, the largest island in the Azores archipelago is governed by its own rules, determined by its volcanic topography and changing climate. In this context, any artistic attempt that aspires to make sense must necessarily be expressed around the landscape and fueled by the energy that stems from the area. The Walk & Talk Festival has been doing just that since its inception, 11 years ago. Walking and talking, but also creating, composing and transforming an island turned into a blank canvas ready to receive the creative impetus of young artists from all over the world through sound installations, exhibitions and meetings, Offers A walk in nature.

The pandemic has served festival directors, Jesse James and Sophia Carolina Botelho, to think and craft a project for the future with a more international career, already embodied in this last year’s edition, by guest curator Irene Campolmi and a selection of 47 artists from different countries. “We want to be more ambitious in terms of the festival’s impact, but what’s not negotiable is its spirit,” says Jesse James, who was only 22 years old and launched a craze in the least anticipated setting more than a decade ago. This ethos he talks about justifies the isolationism (also created on the fringes), the transformative effect on the local community and the idea that art and culture can – and should be – a fun thing. “For us, the island is an art laboratory in which we can directly experience ideas and concepts that interest us, such as our relationship to the nature of the island and the effects of colonialism,” he explains. “By removing proposals from traditional exhibition spaces, we give landscapes a leading role in pathways that in themselves help us craft artistic proposals,” he adds.

For ten days every July, São Miguel displays his artistic muscles to the world. Thus, the dilapidated building of the Magnetic Monitoring Center, closed since 1961, becomes an improbable hall where João Paulo Constancia, director of the Carlos Machado Museum, explains the electromagnetic properties that the island hides. In the Municipal Cultural Center, video art installation telemetryby Tiago Patatas, explores the use and abuse of land by colonial powers (on the island of Flores in the Azores, a French military base spotted the path of nuclear missiles that devastated land in its Polynesian colonies and desert during its nuclear tests).

The Botanical Gardens of Antonio Borges and Pinhal da Paz have respectively become a celebration of culture dub (subtype of reggae) Through speech and music by Edward George and in a class on the island’s endemic plants, botanist Isabel Soares gave it. The communal stew, cooked indoors at 70 degrees, with fumarole spewing gasses and steam in the bowels of the Furnas volcano, is a valid excuse to talk about the island’s indomitable power like a disturbing video. island attunements, By artist Matthew C. Wilson, at the Farnas Center for Interpretation and Observation, through which a group of images and sounds collected on the surface and in the bowels of the region were displayed. In case you have any medium left to explore, Diogo da Cruz invites you to plunge into Pesqueiro’s natural pools to listen to his underwater acoustic composition. future water. On the surface, a sculpted metal slab that completes his motion sticks to the rocks like an alien menacing from the depths. “The sculpture, in principle, is temporary, but you never know. Perhaps in the end, says da Cruz, it will be the sea itself that decides until its survival.

Namely, the imprint of the festival is always present on the island through installations and murals from previous editions that, at the mercy of the elements, change over the years until they become part of the landscape. Walls broken by murals by Vhils, concrete breakwaters splashed with color by Woozy + Kez fade with each passing winter, and the foundations of an imagined home by Braula Reis levitated on Ferraria volcanic rock with the rippling Atlantic in the background.

In the Fonseca Macedo Gallery, artist Maria Ana Vasco Costa intensifies the island by installing terracotta tiles covered in very green porcelain. The serenity of the formation is only broken by two opposite pieces, like tectonic plates at the height of their rage, new forms arise. The gallery opened twenty years ago, when the seed of art had not yet taken root in São Miguel. Its director, Fatma Mota, chose a project that would give opportunities to Azores artists. “Previously it was impossible to develop here as an artist. Any choice was to emigrate to Porto and Lisbon,” he says. “As a gallery owner, I represent more than twenty artists, who have created from here, who have access to the international art arena and large art galleries such as Arco “.

Private galleries like this aren’t the only place contemporary art has a space. The extraordinary Arquipélago Museum, in the Ribeira Grande, is worthy of any great European capital. This old tobacco and alcohol factory, made of bricks and basalt, remodeled by Joao Mendes Ribeiro and the studio of Menos é Mais Arquitectos, maintains its original industrial aspect, including a massive chimney, massive exhibition halls, art laboratories, artists’ studios, and a library. Its opening in 2016 was a declaration of intent. Considering, moreover, that Rabo de Peixe, a dejected fishing town considered the poorest in Europe, is less than ten minutes away, the commitment to culture as a transformative element is the boldest. Thus, through temporary exhibitions of international artists and imaginative initiatives such as the project four fourwhere four local artists are selected to exhibit their work in small individual galleries (former tobacco dryers) and then they invite four other local artists, and so on, creating a creative chain.

In Rabo de Peixe, starting in October, Spanish photographer Andrea Santolaya will give photography workshops at two schools in the city, as part of the project From the fenes to the fenes: the local development culture matrix, organized by Plano Nacional das Artes. Andrea arrived on the island with an art residency organized at the Pico do Refugio complex and never left. Together with Bernardo Brito, her current husband and owner of Pico do Refugio, she operates this historic building, former militia fortress and tea factory that today serves as a country residence and artists’ residence. Over forty photographers, video artists, painters and sculptors have passed through the years and made their mark in 2019 in the gallery Oh forked Ohlar, Which completely occupied the exhibition space in the Arquipelago Center. “Culture is something that permeates everything here. It is a tool to pave the way,” says Andrea. “The most interesting thing is how art occupies spaces on the island, not only physically, but mentally as well, integrating an audience that is not accustomed to delegating the arts,” he explains.

The occupation of space is a fact reflected in the calendar. After the summer proposal for the Walk & Talk Festival, Letters and Literature take over the Arquipélago de Escritores Festival, which takes place in November. The islands were and still are fertile ground for literature for a reason, with primary Portuguese language authors such as João de Mello, Vitorino Nemesio, or Antero de Quintal. In the spring, it’s music’s turn, when the island becomes a sound paradise during the Tremor Festival, and electronic music and experimental sounds occupy every corner of the island.

Back at the last Walk & Talk Festival last July, other organic voices formed the backbone of sound exploration cajaros association, By Eli Ja, who takes her visitors on a nocturnal journey, with the moon as her only beacon, to the cliffs where shear waters overlap to listen to their croak, which is very similar to the cries of a child. Sitting on the edge of the cliff, the night is filled with spoken words, ringing sounds and stories about birds whose only reference is to the sea and the borders of this island.