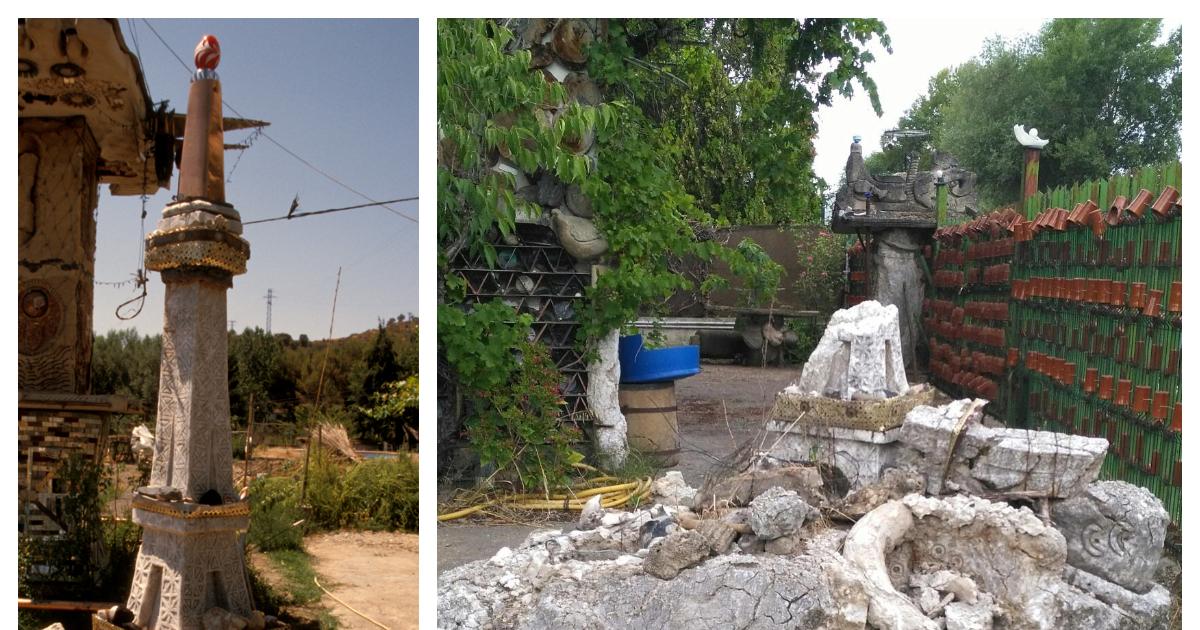 Shattered glass and mirrors, torn metal and torn stones with hammer blows. This is the scenario that José Foncilas Ribera’s relatives found a few weeks ago when they went to “turn” his farm on the outskirts of Barbastro. It is a more than unique space that catches the attention of many tourists when they go to visit the Sumontano wineries and it has been documented by art scholars from half the world.

On the road to Alquézar y Salas there is a house with Facade laden with large totem-shaped decorative and carved elements, Which – fortunately – is one of the few that has been saved from a recent attack. “They went in search of copper. Indeed, the vandals had to make an effort to remove it with beams and hammers because a large part of it was related to the sculptures,” explained Neves Foncilas, daughter of what is considered one of the most interesting creators of the gross art of Aragon. Jose, who is 94 years old today and lives in a condoFor years, he was a carrier of rubble – hence his connection to stone – and once retired, he unleashed his creative world.

“The estate on Salis Road was his refuge and he spent more than twenty years conscientiously decorating his home and garden. His work, though he had no training, Highly detailed and uses a wealth of material: Fabrics, stones, shells, crystals, mosaics…”, comments Nevis. She herself reported the assault to the Civil Guard and two clients toured the property’s perimeter to check if the fence had been forced.

“It is intriguing because there are over 400 small ceramic Bandaliés jars hanging on the fence and they are intact. We have a habit of leaving the door clogged with a large ‘geisha’ carving, moved from its place. Refrain from entering the house Because it is a metal door with a “kickstand” structure, as they commented.

So, the damage was done in the garden where there were some carvings that are hard to recognize anymore – part of the stone has turned into ruins – and where They swept away all the pipes and metal that worked to define the works. “No forced locks were found, but the opening system for one of the property’s sliding doors appears to have been tampered with – or at least knocked out to get them off their pivot,” they comment. Alfonsillas All home locks have been changed And they lament that the administrations, as happened with the House of God in Ebella, have ignored this kind of expression of folk art, so “extraordinary”, that it even attracts attention from all over the pond.

The North American professor praised the work of Jose Foncilas, born in Bisbeen in 1928. Joe Farb Hernandez, one of the international references to so-called gross art in Europe or “ambient art” in the United States. In her book “Singular Spaces,” the director of a California art gallery also noted that “Foncillas is the classic example of a hard-working man who, after his retirement, became deeply involved in what until then for him was little more than a hobby that created a new identity for himself.” Farb is shocked by the damage done to the farm and regrets Loss of the monolith fence and the brass benches that once surrounded the Eiffel Tower sculpture.

The master demands more attention and protection for the work of the man who was inspired by the images of his life (mules, partridges, clouds, farm implements are represented …) and who was supposed to make his illusion Stone workshop and other decorative arts On the farm. His daughter Nevis also suggests that this space can be included in indifference Tourist routes in Sumontano To spread a legacy that will surprise everyone who comes to the outskirts of Barbastro.

Individual examples under study in the United States

Joe Farb Hernandez, Professor in the Department of Art and Art History at San Jose State University, California, He stopped the car he was in in 2002 on the outskirts of Barbastro when, by chance, he saw one of the best examples of disgusting art which he has been collecting for years all over the world. She was fascinated by the lithographic creations of the self-taught artist José Foncilas, who devoted himself to tireless work in his home on the Salas Highway. Farb reflected part of his research in Spain in 2013 in a book called “Singular Spaces,” in which he also documented three other notable enclaves in Aragon: Julio Basanta’s House of God in Ibela, another glass-encased house in Monesma de San Juan and an ephemeral building by Cesáreo Gimeno in an era in Bueña (Teruel).

Farb explains that gross art is a form of expression created by men with little academic training, intuitive And this organically invades the inner space. The main feature is use of recycled materials, So is the fact that these “strange people” create their own tools to work with. The researcher is preparing a second volume – likely to be published next year – from this monumental work that has collected up to 45 unique places across Spain. It also has a website, “Spaces”, where you can consult a long list of extravagant and extraordinary places, including Jose Foncilas’ house and a photo of the artist himself taken in 2002 on its grounds, now vandalized.