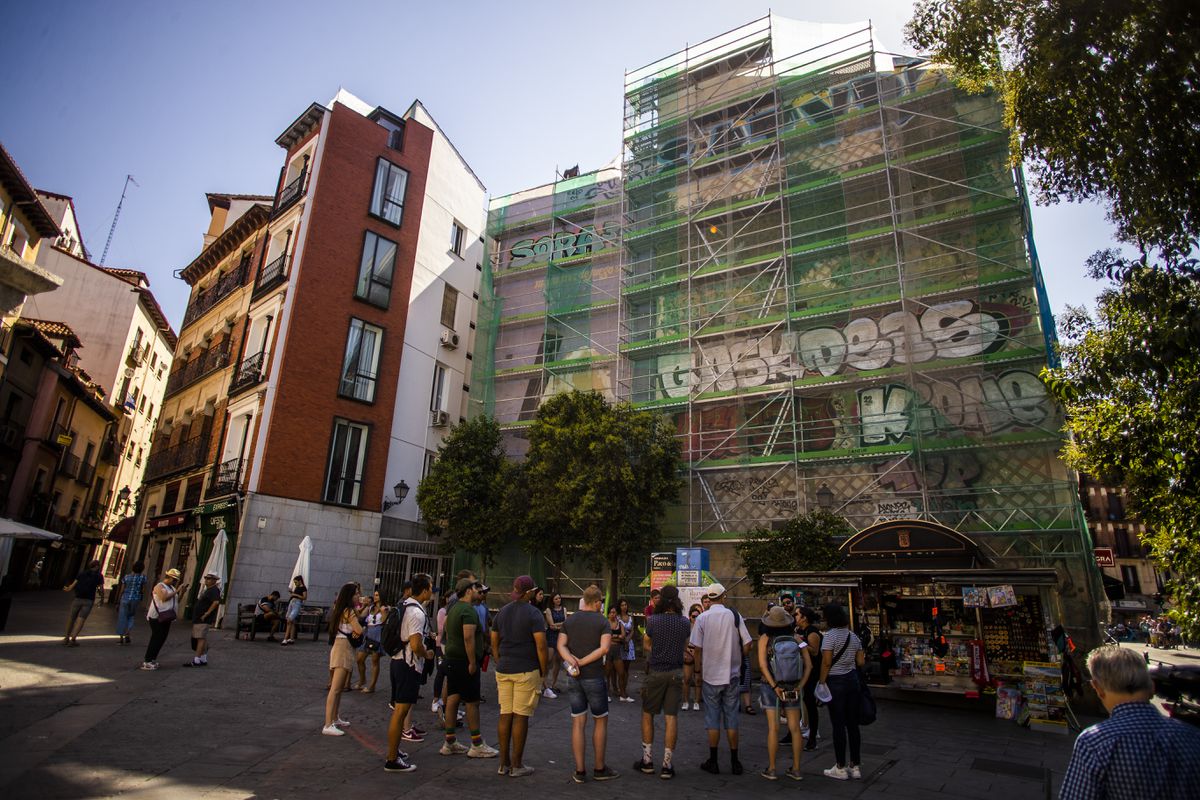 “Unfortunately!” On Friday, Saturnino Vera, president of the Cavas La Latina neighborhood association in the central Madrid region, shouted when he saw the “unfortunate situation” in which the famous frescoes in the Plaza de Puerta are located. Closed, between the streets of Segovia and Toledo “where the origin of the city was explained to locals and tourists”. Vera says the works are a latticework with a vine and a composition with the city’s emblem I went on built water, my walls of fireIt has been covered with green cloth and scaffolding since last February to repair some cracks in the facade of the building and is now completely covered in graffiti. Vera complains that the scaffolding was not equipped with an alarm, which allowed people to climb on it and draw over the works. .

Madrid stops being Madrid when city icons are destroyed! Puerta Cerrada was a mandatory stop explaining the gates of Madrid and the meaning of “My Walls of Fire” pic.twitter.com/Padki4Qw4o

“Madrid ceases to be Madrid when its icons are razed to the ground,” asserts the association president, who states that “Puerta Cerrada is a mandatory stop” on tours teaching tourists where the medieval city gates were and the meaning of “firewalls.” Vera explains that any work carried out on buildings in the historic center requires special permission from the city council because it has special protection, which requires the building’s owners and the city hall to “respect the heritage and clean the house.” The graffiti and murals have been restored. Municipal sources reported to this newspaper that “restoration work is underway on the facade, as the building did not pass 2021 ITE” and that upon requesting the license, the local Historic Heritage Committee, which ordered the murals to be preserved, intervened. .

The paintings, which occupy the party walls (blind walls) of a building on Segovia Street, the corner with Toledo, a stone’s throw from the Plaza Mayor, were executed in 1983 by the most famous Spanish designer, Alberto Corazon, for the initiative Mayor Enrique Terno Galvan in an attempt To restore the mural tradition of the city and revitalize the center.

A Friday morning guide explains the history of the capital to a group of tourists trying to withstand the heat in hats and hats in front of this facade affected by a large crack running from top to bottom. And you will wonder why the door is no longer there. Thrown by Felipe II,” reveals the guide, Victor Torres, who points out that the Puerta Cerrada is a key point on his way. “The first to arrive climbs. “There are many rounds that go through here,” adds Torres, 29. Within a few minutes, another group of 30 tourists appeared with another guide at the front.

What affects the most is the closest to what happens. In order not to miss anything, subscribe.

In a booth in the square, among the perfectly placed magazines, is hiding Antonio Izquierdo, 61, who continues his grandparents’ family business. The city council put up scaffolding in February and graffiti artists spoiled the facade. They took the opportunity to climb the stairs and paint the wall. It is a disgrace.” The same opinion of Valeriano Ferreira, 77, who sits, like every morning, on one of the benches in the square with his crutch and a white hat. Asturian has lived in Madrid for 57 years, asserts that “the City Council has paralyzed work” and that the facades have been vandalized since Two weeks: “They came at night and painted on the murals, before he wasn’t there.”

The building is “Manolo del Valle, the architect who made a lot of money”. It has five floors and two commercial buildings with a restaurant and cocktail bar. In the hall, presided over by a large mirror and purple flowers, is a janitor, Maria, who does not want to reveal her last name. The woman confines herself to saying that it is unknown and that the mural is protected while she closes the door. Here live renters, tourists from tourist apartments and lifelong residents of the neighborhood. Area traders understand that everything is a mystery. “Nobody works here,” said Juan Ventura, 59, a bartender at El Madroño, as he pointed to a sign hanging from the facade that read Cardenas Rehabilitation of Buildings.

Of the six murals, only one remains

In 1983, the Municipal Planning Office closed two of the streets that meet in Puerta Cerrada to traffic, and Alberto Corazon executed a total of six murals at various points, half of which were paid for by Coca-Cola and the City Council. Of the three original works on this side of the square, the two that are now covered in graffiti have survived, albeit hardly very deteriorated.

One is a vine in wooden clamps and the other is flint carved on the water and struck by a huge iron, in reference to the first emblem of the city, from the 12th century, where flint, iron, sparks and water also appeared. . This coat of arms was replaced by a bear and a strawberry tree in the time of Alfonso X. I went on built water, my walls of fire, the phrase that stood out against the violet background of all, was in the emblem and combines the fact that the Arabs built the first mairet over ground waters and streams and that sparks spurted from its first defensive wall, made of flint or tongues of fire when attacked with arrows. There was a third fresco, Trombe Lowell simulating a 19th-century facade, which disappeared after the opening of several royal balconies.

Among the other three murals, the most famous one was lost in 1995. It was the Butcher’s Rooster, which decorated the walls of Puerta Cerrada’s Concert No. 3 and was the cover of a magazine issue NEWSWEEK Dedicated to Madrid in Movida complete. But to fix some leaks in the facade, the neighbors have already worked and covered the wall where the rooster was a salmon color. “What is painful is the lack of respect and appreciation for the city,” criticized Corazon, author of the country’s most famous slogans such as those of Paradores Nacionales, Cercanías or ONCE and who died in February 2021.

The city council ordered it to be repainted and the designer offered to do so, but the neighbors replied that “the rooster, let the mayor put it in his house” and it was never recovered (in its place, there is now one by artist Hilda Palafox). The second, a landscape, disappeared in 2011 with the demolition of the entire building. Of the six, the fruit and vegetable staple in the corner of Cava Baja, above La Terraza Bar, is still alive, although there are graffiti as well.