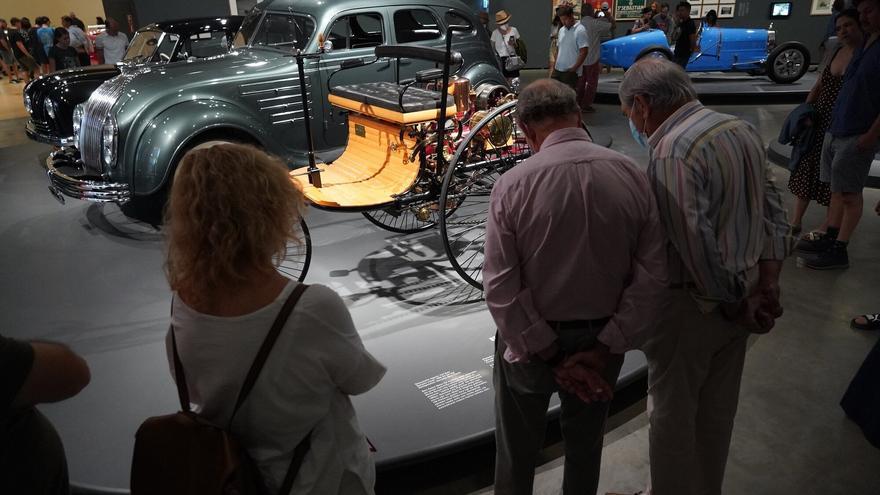 If someone is fascinated by the beauty of cars, they are Josepa Iraula The The Balmasedarra driver, the Spanish mountain champion who drives the Euskal Selekzioa. Iraola has just returned from competing for several weeks in the European Mountain Racing Championship, where the team was among the top three in the general classification, and will spend a few days on vacation in his hometown, before the start of the new car challenges. But the racing driver does not want to miss the opportunity to see and Enjoy the gallery of passion, cars, art, architecture, it shows The Guggenheim Bilbao This attracts thousands of people from all over the world.

“I haven’t had the opportunity to go to the museum yet, but I didn’t want to miss it,” admits Iraola, accompanying us during a visit to the Guggenheim.

The exhibition, curated by British architect Norman Foster, tCollect 38 legendary cars Which combines beauty, innovation, passion and art on the second floor of the Frank Gehry Building. Among them is the stunning Rolls-Royce 40/50 Alpine Eagle from 1914; 1924 Bugatti Type 35, the car that won more than 2,000 races in the 1930s; An imposing Cadillac El Dorado, from 1959 or a Ford Mustang PRJCT 50, from 1965.

They are all located in the center of the rooms and surrounded by artwork and architecture. Many of them are presented to the public for the first time, as they belong to private collections or foundations that have donated them for the occasion. In fact, the logistics of many of the exhibits was very complicated. “Car transportation is a very complicated issue, it is not as easy as people think and much more, in the case of cars of this type”The pilot, who knows from experience the difficulties involved in transmissions, warns that he usually races with a Formula 1-like car, similar in performance and measurements to those on display at the Guggenheim.

Sponsored by Foster himself, it was organized In ten museums and seven galleries which deal with various themes in roughly chronological order, beginning with the Beginnings and continuing with the Chambers of Beginnings, Sculptures, Merchandising, Sports, Visions, and the Americana Rooms. Upon entering, Iraola stops at the Patent Motor Car, from 1886, the first car powered by an internal combustion engine, which was also driven by a woman. In August 1888, Bertha Benz left Mannheim for Pforzheim in this car built by her husband. He covered 106 km of the 12-hour journey.

But for the Basque athleteOr his eyes immediately turned to a 1924 Bugatti Type 35. “This is a race car, a technical gem. It would be hard to be able to drive it.With more than 2,000 victories in various competitions, both on track and in mountain racing, it was one of the most successful sports cars ever. “At that time, making a car like this had a lot of advantages, and now it’s Everything is more innovative; We know what works, but these were the pioneers of racing cars, the Basque driver explains.

During the tour, Josepa Iraola recalls his beginnings, as well as his first car, “a golf, my father bought me when I was 18”. He was a cyclist until he was 27, and ran in the amateur class. He came to win races and even competed in some professional events, but he soon returned to his great passion for cars. Now, he drives a BMW M2 on a daily basis and Nova in his competitions.

It’s hard to pass by any of the vehicles on display at the Guggenheim accompanied by artwork. How The yellow Pegaso Z-102, which was the fastest car in the world at the time of its launch in 1953. “He was ahead of his time, he had already reached a speed of 240 kilometers per hour. Wow, he is so cautious, with the battles and stories that will take place, it seems unbelievable that he is in these conditions,” adds Iraola, who also stopped in front of the Henry Moore sculptures. Calder, which mimics the curves of cars.

But if there’s one room in which the Basque driver enjoys himself more, it’s the one that combines the most exciting sports car in history: a Mercedes-Benz 300 SL, from 1955, that looks like it’s going to fly. Its doors open upwards. The gray Aston Martin that James Bond drove in GoldfingerEquipped with two machine guns, a retractable bulletproof shield and an ejection seat in case you have to flee.

And above all, with 1962 Ferrari 250, owned by Pink Floyd drummer Nick Mason, who personally came to the Bilbao Museum to attend the show. It is the most expensive car in the world, you can only find 20-30 units, so The price of one of them can reach 40 million euros.

“It is very difficult to pick one out of the whole show, but if I had to, I would choose this show and Formula 1, which is very similar to the show I run in terms of performance and dimensions,” admits Jozo Iraola, while in the rooms they hear the roar of motorsports. “That’s how it actually looks,” says the Basque pilot.