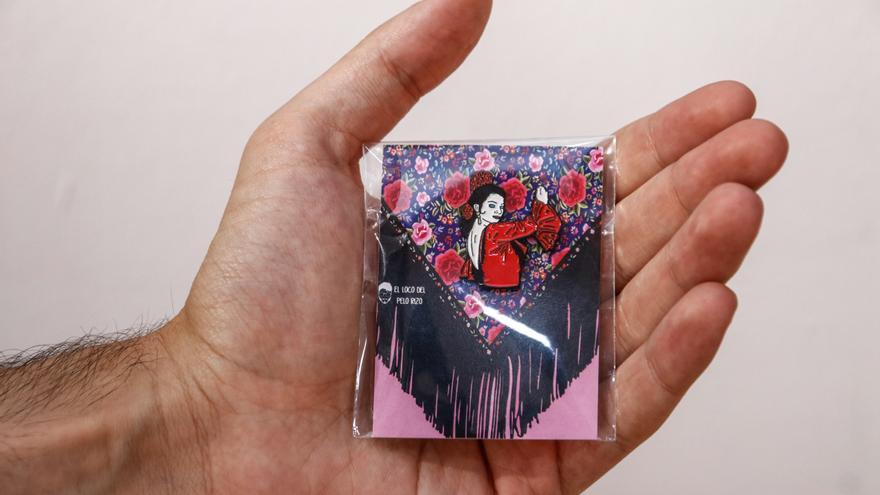 Combining art and vindication is a talent that not all artists know how to impart, and not all audiences have access to the background and understand the work itself. Only those who wonder why they see it, who can find the ultimate meaning and meaning that the author gives to those he paints. The curly-haired lunatic is one of those madmen, pardon the repetition, who ventures to expose his fears and openly show his character, what he stands for, leaving himself naked before whom he pleases to contemplate his illustrations.

The artist from Salamanca introduces himself “I’m Alejandro Quintano, but I call myself El loco del pelo curly”. It is his studies in art history and dark curls, which in a proud moment and wink the painter Vincent van Gogh, who was called the red-haired madman, gave him a name a few years ago.

A high school history teacher, he embarked on a master’s degree in design and architecture that catapulted him into the creative world, drawing in digital form and trying new experiences. “I have painted all my life, I never thought I would devote myself to this, but well, the city of Caceres gave it to me.” It is not in oil, as the painter who gave his name did, where he paints, but his lines and bright colors are able to convey sensations as Van Gogh did in The Starry Night.

Beginnings, as they say, are not easy. In his case, the show began in a location far from galleries or studios. His illustrations first found their place in the window of a vintage hair salon in his hometown of Salamanca, and have continued in bars. But patience, desire and desire led him to Madrid, where galleries and museums like Thyssen gave him the opportunity and, above all, the knowledge that his paintings had value and the potential for success.

She landed in Caceres, along with her friend Sergio, of Extremaduran who saw the possibilities that a city like this could offer them, the costs of living cheaper than those of the Spanish capital and the convenience of a comfortable place. They came up with the idea of ​​the opposition, but as you say: “The same uncertainty is to create a company to oppose, and we decide, for the time being, what we like.”.

They are not all, nor many, people who have the courage to risk for a future dedicated to art to realize a great dream. With a small and pampered gallery on Roso de Luna Street, two steps from the center of Plaza de San Juan, he began his journey in Extremadura months ago. Under the name La Sindicalista, her studio is based on illustrations that fill the white walls that compose it with color and life.

His art is captured with his eyes open, but his hallmark is drawing pictures with low eyelids, evoking memories and memories, the fun moments that come to mind when we try to renew something that makes us happy. The curly-haired man stuck to the memory, it’s no coincidence that he lived surrounded by people with Alzheimer’s disease who were born into him fear and a greater interest in not being forgotten than he made him what he is today..

Another one of his creations. The artist in the Roso de Luna gallery. Silvia Sanchez Fernandez

This is the reason for her inspiration “In the obsession of legend, I have certain characters and a memory of what built my character.”The author reveals. The illustrations evoke flashbacks and maintain meaning with the small quote that accompanies them making them carry a more meaningful meaning, bringing them back to the moment when that person recited them.

Queens was Quentano’s latest collection of illustrations, consisting of icons and references that many people can feel recognizable. La Veneno appears as a virgin, deified in her work, and admits that it is art; Controversial characters, for better or worse, are the key pieces and who remember the collective feeling of the entire LGTBIQ+ group.

Lesbians, gays, transsexuals, bisexuals… Everyone can find an artist who represents them, has marked them in their life path to shape their way of life, open up and show who they are without hesitation.

Because he is the one who sympathizes most with the author and because of the way he struggled for his ideas, he is La Veneno (a transgender actress from Almeria who died in 2016) which occupies the main and largest composition of La Sindicalista in a drawing that reflects the shower in which her life ended. Despite her way of being “a suburb, let’s say she talked murderously, but it was very natural and she may have been the one who pushed, even with kicks, to make certain groups visible.”

on the shelves. creations for sale. Silvia Sanchez Fernandez

In the first times, pioneers become landmarks in this fair, where there is no shortage of folklore women, that group of women who captivated the hearts of almost all of Spain at one time and who also looked after the “beetles”, with somewhat correct messages, as Rocío Jurado which stands for “homosexual race”. The group always understood the lack of knowledge and was able to capture a message with a good background. Lola Flores “La Faraona” or la Jurado (“The Greatest”) or Isabel Pantoga They were among those chosen to represent Spanish folklore accompanied by messages that were once welcomed by the common people.

“I wanted to express in this city that art can also represent, apart from fears, insecurities or joys, it can be something fun, with famous pop characters, that can bring us back to the good memories we have from the past”. This artist’s ultimate goal is to get everyone to wear his shirts, use his cups for morning coffee or find one of the bookmarks he sells among the pages of his favorite book, figure out how to capture the message, and close his eyes. And re-spend the good times.

In addition to knowing how to recognize the support that the LGTBIQ+ family deserves and needs, Alejandro clearly represents “what he likes. I try to represent everything, but it is very difficult because now the different parts of the group are categorized a lot and I don’t want to describe it”. It is necessary to separate from structures and labels and to achieve the union required to achieve greater acceptance by a society that still feels rejected.

“It is a fear that I will always forget, I want to record what I like.”

It sends a clear message to the group: “Let’s innovate and do things freely, without judgment and without classification.”. Those who have already left have struggled a lot to get to the point where we find ourselves today, which far from having the full recognition of all to have the same rights, there is still a long way to go, already halfway by those who today were brave to show their ideas and their reality.

They are not all those who loudly shout that they love a singer or actress associated with the group, those who do not shy away from showing who they are to the outside world, but perhaps with half the letters and illustrations with closed eyes, many, many take the courage to fight for the cause and keep the memory of what they do not want Artist Alejandro Quintano, El loco del pelo curly, To be Forgotten: Memory.