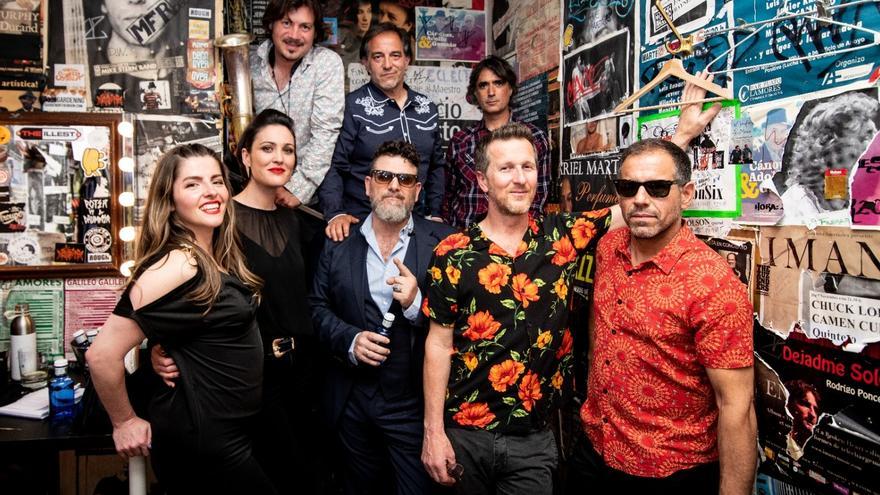 The Travelin Brothers won’t stop this summer. They just got off the plane after their performance in France and are going up Sunday evening at El Arenal Theater to close the first edition of the free Bilbao Blues Festival After performing Fantastic Negrito. In addition, they will do so with an expanded lineup of 11 musicians and singers, and will collaborate with two notable guests: Vito and Mikkel Erntxon. “Having a first-class festival is a luxury and we assure you that you will see the fireworks when playing with Fito and Erentxun,” explains Aitor Cañibano, the group’s guitarist.

I think the tour is going better than ever.

– Right, we’re full. We started playing in May, and June and July were stratospheric. We will continue until the beginning of August when we will take a break to be with the families and resume concerts in September.

-This is it. In about three months, we’ll be having about thirty concerts, which means more focus for dates. We usually release albums in February and the latest one, Comin’ home, was released in May due to the pandemic. So with the show in theaters and summer festivals, dates are becoming more focused. In short, in our line though maybe with some concerts.

Do concerts focus on the latest album?

The feedback we get from the album, both from the records of the album itself and from the same audience at concerts, works very well. We’ve put together a Comin’ home repertoire with a half dozen other songs from our discography that we think are the best. You’ve left a massive playlist.

Do you think it is necessary for a city like Bilbao to hold a festival like Bilbao Blues?

-you are right. We had Getxo Blues, but it hasn’t been done that way since the pandemic. Now there was an important gap and the gap appeared in Bilbao, but I think it’s just a coincidence, it has nothing to do with the lack of Getxo. The fact that it exists is so wonderful to us, as artists and as an audience. It is a luxury to have a first class festival to listen to great musicians and even be able to play in it.

Now that’s a luxury. And in the first edition.

– It’s such an honor to be there because the day the festival becomes something so big, which seems to happen, we’ll be able to remember we were there the first year. Also, we will try to enjoy the performance on Sunday of course.

What do you think of the site poster? It mixes generations, styles and origins.

Being the first version, I suppose the idea of ​​the organization is to try to attract as many people as possible. This way it will be announced, and everyone can feel good by pulling different styles and hopefully it will be put on the calendar for future releases. I see this as the right direction, because it is necessary to sow little by little, and then, when it is already known and standardized, choose to walk along a more definite line. Being open to all audiences with artists like Fantastic Negrito or Alejo Stivell, who are not orthodox in the blues genre, is a good strategy. This way we’re not the same blues whims as always (laughs). That people come and know the genre and sign up.

The group always advocates that all music begins with the blues.

-That’s right, it’s all blues, all music ends by touching it or beginning with it. It’s good to absorb the diverse styles at this festival, even if they casually play the blues. In addition, the funds are public and a large segment of the population should be satisfied.

Will they act in Bilbao with the extended squad?

– Yes, the usual six of us will be there, as well as the supporting vocalists, Ines Güney and Noua Ijegorin, already known as the Travlin sisters, two coppers and a pair of keyboardists. In total, we will be eleven on stage. From downtown Bilbao (laughs).

They went from one showgirl to two. How it works?

– Well, twice the quality (laughs). Seriously, very well, they do it well, plus not only do they sing wonderfully, but their choreography is also very visually appealing. It’s another point where we look beyond the solos of musicians or singers. In the end, we try to make a show that is not only musical, contributes visually and this is a party.

And at the end of the festival they will perform a show with two special guests: Vito and Mikkel Ernxon.

– The idea came from the festival management and they are friends. Upon our appointment and finding out that we would love to have guest artists, they told us about contacting a special artist. And we did that with both, where we have good feelings. With Fito we already tried it to record the live album that we did in Arriaga, but a date issue prevented that. Now, with his tour over, he was happy to sign up. And with Mikel we share a keyboard operator, Mikel Azpiroz.

Can you come up with something about sharing both of them?

– There will be a little surprise, not all of them will play only one song … they will do something else, yes. It is planned to make a version that we have not played before, and also brought some songs by Fito and Mikel to our field in terms of sound, and there will be something else. I think it would be great to be able to play with these monsters, it makes us very excited. We see it as another reward and satisfaction that music gives us. In addition, we will do it at home, in Bilbao, and on a majestic stage at the closing of the festival. I think the audience will enjoy the party.

With Vito it makes more sense, since he loves the blues-rock of Eric Clapton, JJ Cal or Rory Gallagher, but including Erentxun caused some surprise.

Everything comes from the same place. Mikel, at the beginning of Duncan Dhu, had a very rockabilly touch that was born out of the blues, although he later followed other musical paths and evolved. Despite this, he continues to use popular music as the basis for his music and it seems to me quite appropriate. In addition, we will try to take Mikel more in our field. It would be something special, neither our songs nor theirs would sound like they usually do.

Did you practice something together or are you going to go brave? Being from Bilbao…

– With Fito we had a little rehearsal that day and with Mikel we will do it on Sunday itself. We are used to flying this way and there is a keyboard operator association that provides the facilities. Training on our own and with the digital age just got easier. What I can guarantee you is that there will be fireworks and flames on the stage.

Museum talk at 11:00 a.m.: Divas and Fighters. Women in the history of the blues

Noon, in Casco Viejo, Rogues at All Rhythms Dixie Band.