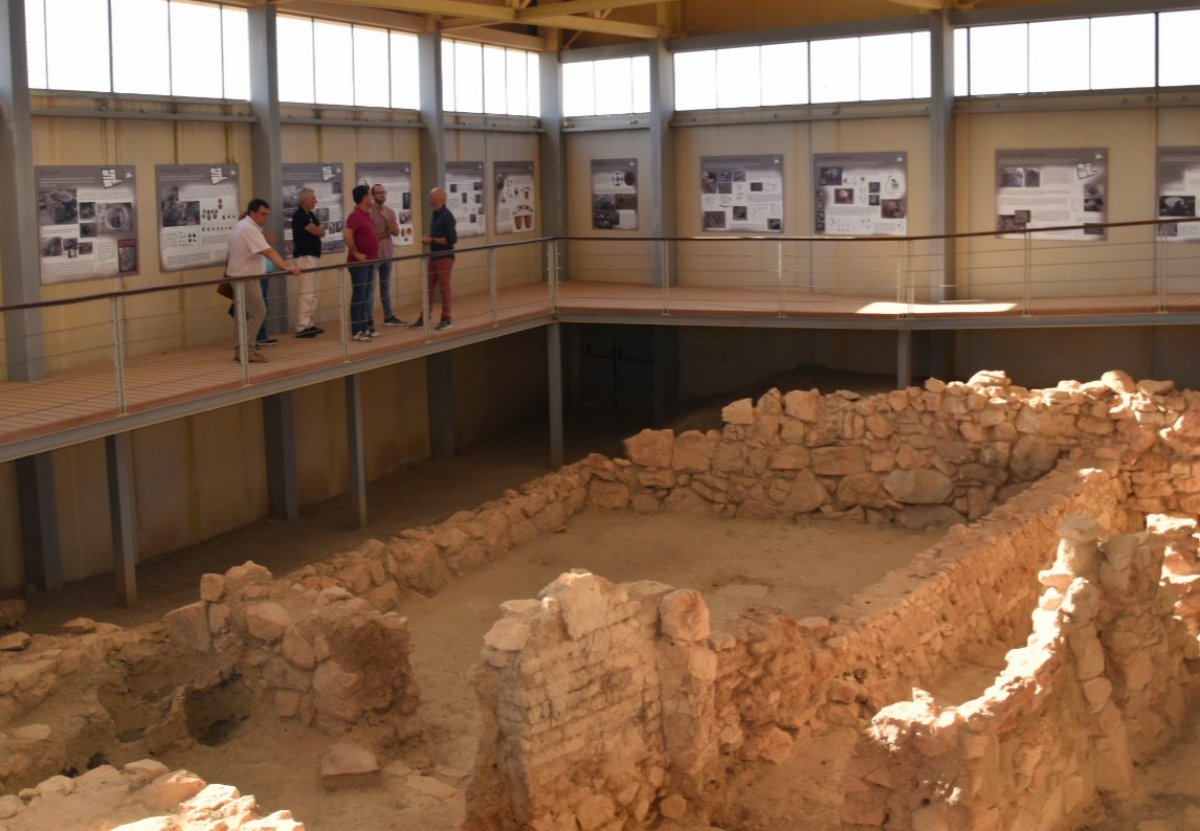 On Friday, the Agripina Sociocultural Center in Lezuza hosted the official presentation of the book Libisosa: Frozen History, published by the Don Juan Manuel Institute for Albacete Studies (IEA), an independent body dependent on the Albacete County Council, whose Vice President, Fran Valera, participated in the event, Emphasizing the importance of this publication on an archaeological site of national importance.

Written by Hector Oroz, archaeologist, professor of ancient history at the University of Murcia and co-director of the excavations, this work, which comes nearly a quarter-century after the excavations began (in its origin the regional institution played the role of determinant), is the most comprehensive work to date on Libisosa, where The Ibero-Roman phase occupies a leading role, and is considered a ‘mine’ for the investigation of the final Iberian period and Romanization, including the same volume “Information and Documentation Distinguished” from the most recent expeditions around it, as announced during this day.

Valera thanked the efforts of all the people and entities that made it possible for this book to see the light, and Valera wanted to acknowledge the meticulous and tremendous work of its author, as well as the participation of the City Council with the Mayor, Alfonso Avendano. , at the helm, and the cooperation of the watchdog, in the person of its director, Antonio Silva, (all three are present in this work), highlighting the figure of José Oroz, the first director of exploration, “the seed of everything that came later”, which he had, In addition, the opportunity to visit the site, after their explanations very carefully, before the show.

In addition, he toured the “collection of museums located in the social and cultural center of the city, where some of the more than 155,000 recorded objects after being found in this type of ‘Iberian Pompeii’ are displayed, a space that, together with the site itself, has been Visited (via guided tour) by about 3,000 people since the start of 2022.

The Vice President of the Province, who highlighted the Regional Council’s commitment to the preservation, research, promotion and dissemination of the historical and cultural heritage of the province, confirmed the support of the Foundation headed by Santi Cabaneiro for the work done on this site, making it clear that the goal is to continue, “at least another 26 years”, Adding resources in this important mission “out of commitment and conviction”, from a full awareness of the archaeological “potential” of this scenario and, above all, about how important it is to continue to contribute funds that will allow us to advance in restoring part of our history and roots in order to disseminate and empower it, and to supply these The region with new and interesting tools that promote the development of the provinces on several levels, tourism is of particular importance, as you have pointed out.

He also noted that Libisosa is a powerful tool with which, through the past, it is possible to highlight future opportunities that transcend province and contribute to the social and economic revitalization of our land, wealth generation and direct and indirect employment.

In the same way, he did not hesitate to highlight the conscious efforts that have been made in this unique enclave through the continuous cooperation of Al-Basit Provincial Council since it began operating in 1996 along with the District Foundation itself, which developed from 2015 until 2015. Institute of Studies The simple. Some of the tasks that in turn were crucial to its recognition as a sixth archaeological site in Castilla-La Mancha (the second in the Albacete province next to Tolmo de Minateda).

In fact, in 2022, the IEA and the Lesoza City Council reissued the cooperation agreement they sign annually, which translates into a contribution of 15,000 euros to strengthen the campaigns on Cerro del Castillo. In addition, in the past seven years alone, through the Albacete Studies Institute, Diputación has invested more than 100,000 euros in the work in progress on this site, making it possible, among other things, to gain in-depth knowledge about his Ibero-Roman period (although Only about 10% of the mound has been excavated so far).

In any case, these excavations (in which Lezuza City Council, JCCM or the Universities of Murcia and Alicante also collaborate), are an outstanding mark in terms of knowledge of the archaeological and historical heritage of Albacete, shedding light on this ‘gem’ which was a Roman colony under Italian law , Oppidom accepted Oritanus and, finally, a strategic enclave in the late Middle Ages, as mentioned in great detail in the book released today.

Valera commends the work of the IAEA as a “guarantee” for the preservation, research and dissemination of regional historical heritage

The deputy county chief also noted the need for outreach exercise to accompany archaeological research, warning of the importance of making these sites “global and accessible spaces, both physically and in terms of knowledge so as to reach all citizenship,” a company where the IEA works hard.

Evidence of this is that, through this organization, remarkable work is being carried out, beyond economic cooperation with excavations in Libisosa, with the aim of publicizing the importance, importance and scope of the site, as well as the results of the work and studies that are being carried out in the area.

Thus, along with the reports and notes presented after each campaign, the work is carried out academically with scientific publications in various prestigious journals, and now also through this book, besides, during the presentation it has already been prepared. The second book and an educational guide about this archaeological park. In the same way, the efforts of Libisosa to go beyond the scientific field and reach society as a whole through social networks (libisosaoficial) have been highly valued.

In 2022, Diputación encourages the investment of more than half a million euros for research, preservation and dissemination of heritage

The commitment of the Al-Baseet Provincial Council and its government team to the preservation, research and dissemination of the immense historical and cultural heritage that the county cherishes is translated into concrete actions, as evidenced by the fact that in 2022 the Foundation will invest, in coordination with the International Energy Agency, more than half a million euros in various initiatives in this trend.

With very important developments such as the creation of a helpline (to be dissolved soon) that was awarded 350,000 euros and targeted at Al-Basit City Councils to fund projects to conserve, consolidate and rehabilitate properties of significant cultural value to the history and heritage of the province, to which is added a significant increase in the budget that the Foundation annually allocates to the International Energy Agency (up to 715,000 euros), while this body has increased by about 15% (up to 154,000 euros) of the amount invested by the four lines of aid it promotes in terms of research and the agreements it has signed with the various associations of the El Bassit region to carry out works on archaeological sites (among which which you maintain with Consistory Lizzuza).